Food wastage. Is there a way to prevent it?

Every day, we hear in the news that people in different parts of the world are suffering from hunger and malnutrition. 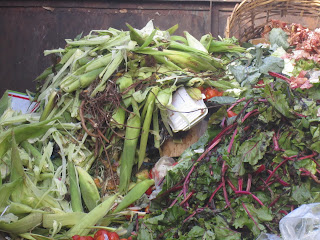 Nearly one billion people in the world go  to sleep hungry each night since they do not have anything to feed themselves due to several reasons (economic & food crisis, increase in food prices, over-exploitation of the environment, poverty trap, over-population, war, climate change & natural calamities, land scarcity etc.). Now that the World population has reached to 7 billion people, it implies that 1 out of 7 people are likely to suffer from chronic hunger.

On the other hand, we see that in other parts of the world (including Mauritius), there is food wastage every day. One-third of edible parts of food produced in the world for human consumption is wasted, which makes approximately 1.3 billion ton per year. However, the amount and type of food wasted in different regions and countries vary. Food wastage in low-income countries occurs mainly due to constraints related to finance, management or technical (storage, harvesting, packaging and other facilities, while in medium/high-income countries, it occurs main because of consumer behaviour (shape, size, colour etc.). Moreover, food wastage is also linked to waste in natural resources like water, energy and other inputs like fertiliser.

The video below shows clearly the problem of food wastage in the European Union:

What are the possible causes of food wastage and how can we prevent it?

Food wastage can happen throughout the food chain, starting from agricultural production, going through harvesting, sorting, handling, processing, storage, transport till it reaches the consumer for consumption.

Just to be on the safe side in case of unfavourable climatic conditions, leading to damage of the produce or infestation of pests and diseases in the field, farmers tend to produce a bit more than their demand is. As a result, supply is greater than the actual demand and the remaining food is wasted. In certain cases, due to over-production of specific commodities, the price of the products decreases and only those of best quality are sold out to fetch higher prices.

The food industry is a complex one with various stakeholders involved in the food chain. Food is produced in surplus mainly because of the lack of communication among these stakeholders. If it is clear about how much food is required by whom at a particular time, there would not be the need for producing more food than required. So, the solution is for stakeholders to collaborate more and contribute in preventing food wastage. Where industrialised countries are concerned, some may say that they can afford to waste a little portion of food, but as it has been mentioned, food wastage is also linked to waste in natural resources. Therefore, sensitization of the population and the stakeholders involved becomes necessary to remedy the situation.

Cause 2: Early and late harvest

Sometimes, in order to get some money, smallholder farmers tend to harvest their produce prematurely, which is not ready for human consumption and due to poor quality, it is disposed. On the other hand, some farmers harvest their produce late which ends up being disposed like in the previous case.

To keep the good quality of the product and at the same time fetch a good price for it, smallholder farmers must collaborate and produce according to the demand. If one commodity X is available from one farm, another commodity Y will be available at the other farm. In this way, food surplus and wastage can be prevented. However, it is to be noted that regrouping of farmers is not an easy task (at least in Mauritius) and much effort in required by extension services for this system to be implemented.

Consumers like to buy products which are uniform in shape, size and colour (appealing to the eyes), and only the best one are selected for them. But what happens to the remaining ones which are not so promising? In meat production, the non-uniform products are sent for processing and same applies for vegetables and fruits are sent for further processing (pickles, jam etc.). But still, there is a certain amount of these "non-conforming" food which are disposed.

Is it true that consumers are not willing to buy food which is not too attractive but still have the same nutritional content and can be obtained at a lower price? It may be a perception that these lower grade products will not be accepted by the consumer, but its only after a market research that this will be confirmed (and this will certainly differ in different countries!).

Cause 4: Poor marketing structures and facilities

It is a fact that in many cases, food supply is not a problem, but the problem lies in ACCESS. Due to poor marketing structures and facilities, food does not reach the whole population in a country. There is a tendency of over-production and wastage on one side, while on the other side, people are not getting access to food due to high prices.

Governments should invest in marketing structures and facilities so as to ensure that safe and nutritious food is easily accessible to each and every citizen of the country at an affordable price.

Improper food production and food handling leads to risks linked with food safety. If a food is contaminated or there has been any kind of adulteration, the food should not reach the consumer and has to be disposed eventually.

All stakeholders involved in the food chain should be trained on standard procedures (for example ISO, HACCP) so that food does not have to be disposed because of issues related to food safety.

Cause 6: Lack of facilities

Lack of facilities related to post-harvest, storage, transport and processing are important factors to be considered as lack of facility in each one of these leads to large amounts of food losses. These cases are mainly from developing countries where smallholder farmers are cultivating on a small-scale and do not access to these facilities.

Smallholder farmers must get support through subsidies so that they can afford these facilities and hence less food will be wasted.

Cause 7: Disposing is cheaper at times

In some cases (usually when prices are low), it is cheaper to dispose the surplus food rather than sell it (cost for labour, transport and fuel etc.).

Given the proper facilities, sub-standard products can be used for processing and value addition. Investments can be made in food processing equipments and markets can be developed so that these value-added products can be sold at a higher price, hence increasing profit.

Due to climate change, there is emergence of new pests and diseases which affects crops and livestocks. Farmers are unable to control diseases, leading to food wastage ad losses.

Climate change is having severe impacts in the fields over the world and constant research should be carried out so that preventive measures to control new pests and diseases are found. With better control of pest and diseases, food wastage can be reduced significantly. In addition, farmers should get access to extension services so that losses can be avoided.

The above are some causes and prevention measures that have been identified. But in order to fight against hunger and food insecurity in the world, it is the responsibility of each and everyone  of us to contribute in preventing food wastage. In Mauritius, anyone would agree that whenever we are leaving food behind while having our meal, our parents or elderly people would tell us to think about the millions of children in Africa are do not have food to eat and are suffering, while here we are wasting food every day. But... Do we care enough and prevent food wastage?